Ireland best embodies the Islamic values of opportunity and justice, according to a survey by a leading US academic

The country in the world most faithful to the values of the Koran is Ireland according to an Iranian-born academic at George Washingon University in the US.

The Koran’s teachings are better represented in Western societies than in Islamic countries, which have failed to embrace the values of their own faith in politics, business, law and society, a leading academic at George Washington University has said.

A study of 208 countries and territories has found that the top countries in both economic achievement and social values are Ireland, Demark, Luxembourg and New Zealand. Britain also ranks in the top ten.

The first Muslim-majority nation is Malaysia ranking at 33, while the only other state in the top 50 is Kuwait at 48.

Hossein Askari, an Iranian-born professor of International Business and International Affairs at George Washington University, said Muslim countries used religion as an instrument of state control. He said: “We must emphasise that many countries that profess Islam and are called Islamic are unjust, corrupt, and underdeveloped and are in fact not ‘Islamic’ by any stretch of the imagination.

“Looking at an index of Economic Islamicity, or how closely the policies and achievements of countries reflect Islamic economic teachings – Ireland, Denmark, Luxembourg, Sweden, the United Kingdom, New Zealand, Singapore, Finland, Norway, and Belgium round up the first 10”

The results can be summed up in a famous saying of Mohammad Abduh over 100 years ago, after simply using his eyes, “I went to the West and saw Islam, but no Muslims; I got back to the East and saw Muslims, but no Islam.” Namely, Muslim countries have not followed the rules, adopted the institutions and achieved the values and behavior that Islam demands. Instead, non-Muslim countries better reflect Islamic teachings.

“If a country, society, or community displays characteristics such as unelected, corrupt, oppressive, and unjust rulers, inequality before the law, unequal opportunities for human development, absence of freedom of choice (including that of religion), opulence alongside poverty, force, and aggression as the instruments of conflict resolution as opposed to dialogue and reconciliation, and, above all, the prevalence of injustice of any kind, it is prima facie evidence that it is not an Islamic community,” he said.

“ Islam is, and has been for centuries, the articulation of the universal love of Allah for his creation and for its unity, and all that this implies for all-encompassing human and economic development,” he concluded.

Hossein Askari, a Professor of International Business and International Affairs at George Washington University in the US was one of the two authors of the Islamicity index along with Scheherazade S. Rehman, told the BBC that the paper tracked how countries applied the lessons of the Qu’aran to societal life.

“We looked at whether or not the countries did what they were supposed to do.

“We looked at governance, political and human rights and international relations.” 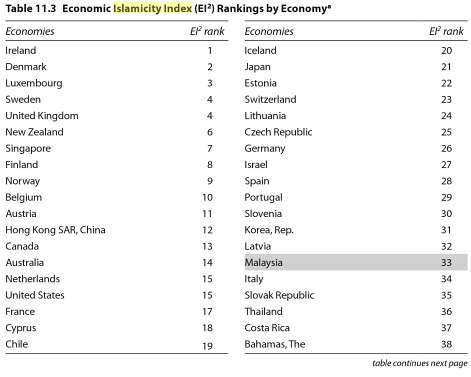 The findings of the report showed that Ireland, the UK and the US all scored higher than every single member of the Organisation of Islamic Cooperation (OIC).

In fact, the OIC’s highest-ranked member was Malaysia at 33, while Saudi Arabia and Qatar are at 93 and 111, respectively.

Professot Askari says that the reason for the low ranking of Islamic countries is their governance.

There are people who use religion as a tool of power and a tool of legitimacy. They don’t care about the Muslim people. They don’t say you have to go out and learn the Qu’aran.

The teachings of the Qu’aran say that economic prosperity is good for society, but Askari’s report found that prosperity rarely trickles down in Islamic countries.

The Islamicity Index ranks countries on how well they adhere to the Koran – so it may be a surprise that the top three are Ireland, Denmark and Luxembourg. Not a single majority Muslim country made the top 25 – Saudi Arabia was 91st. So what’s the reasoning? Hossein Askari, a Professor of International Business and International Affairs at George Washington University helped compile the table.