Two important books on race and identity: Angela Saini’s “Superior: The Return of Race Science” and Jennifer Eberhardt’s “Bias: The New Science of Race and Inequality,”- 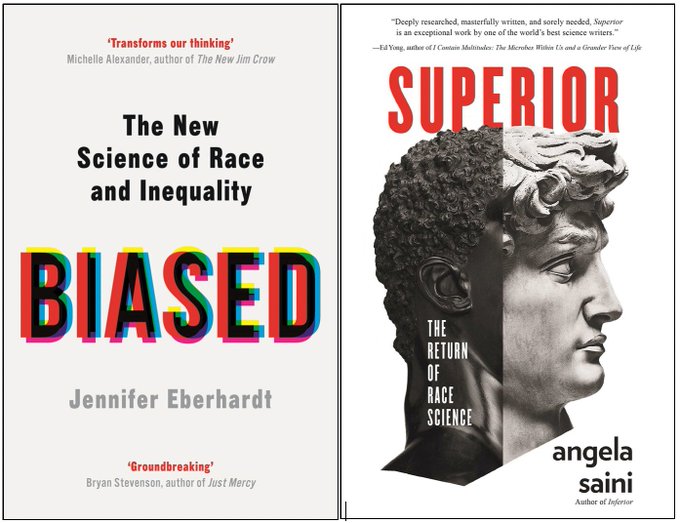 Racism is an issue which is pervasive throughout history. I recognize it is not a black and white issue. Our pursuit is justice but in our pursuit for justice we must recognize and appreciate principles which are universal as well as-

understand the complexities of people, society and power. Angela Saini’s “Superior: The Return of Race Science” orients our discussion on race around history. Race is a relatively new concept arising during the Enlightenment. But it did not appear out of thin air.

It developed out of an ancient notion of supremacy. For Muslims – we can say that Iblis was the first racist in that he declared himself superior to another being, contrary to the Divine will.

The author argues that as scientific knowledge advanced, so too did the abuse of that knowledge – leading to the myths of genetic superiority which eventually unleashed untold horrors on mankind including eugenics and slavery and genocide.

Ultimately this book is a call to action – that we remain vigilant against those individuals and organizations who use race as a means to oppress and deny dignity and justice to others.

If “Superior” gave us a history of racism then Jennifer Eberhard’s “Bias: The New Science of Race and Inequality” presents us with a case study of how racism manifests itself today – and how we must guard ourselves against its subtlety.

The book is structured around stories of racism experienced across the United States. In her social commentary, Eberhardt demonstrates how racist encounters are more nuanced than we may wish to believe.

As a psychologist she explores the cognitive neuroscience behind racist sentiment while also exploring behavioural and learned traits that perpetuate the dangerous notions within society.

She also highlights that differences in the lived realities of people (which are themselves a product of public policy, media and society) can be astonishing.

For example she cites a study in America which found that only 8 percent of high school seniors (equivalent to Form 6 in Malaysia) could identify slavery as the primary reason for the American Civil War while nearly half said it was to protest taxes on imported goods.

Eberhardt writes that “living with diversity means getting comfortable with people who might not always think like you, people who don’t have the same experience or perspectives.-

That process can be challenging. But it might also be an opportunity to expand your horizons and examine your own buried bias.”